Doc Soup: Q&A with the Directors of Everyday Sunshine: The Story of Fishbone 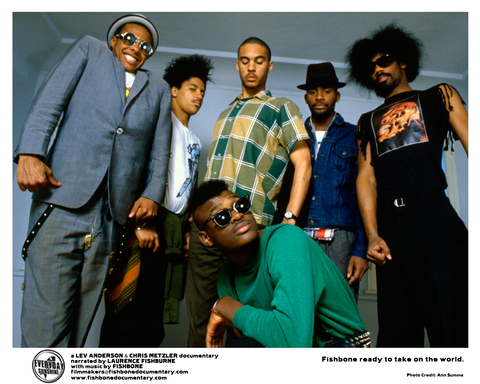 I envy everyone (including POV peeps) who are in Texas right now. That’s because they’re in close proximity to what promises to be a very awesome day of black funk-ska-punk-rock n’ roll, all thanks to the very cool documentary, Everyday Sunshine, which is screening on Thursday at the SXSW Festival in Austin. The film is about the Los Angeles band Fishbone, which will also be playing a live show later the same day.

Everyday Sunshine is, indeed, another rock documentary, which follows in an ever-widening genre, but it’s one of the better ones by far. I’d say it’s a cross between Some Kind of Monster (deep, psychological, inter-band dynamics) and Anvil! The Story of Anvil (funny, has-been moments) which happen to be two of the very best, so that’s a big compliment.

Read Tom’s review of the film and a Q&A with filmmakers after the jump.

Everyday Sunshine is the story of the crazy-ass band that broke onto the music scene in the 1980s. I used to like Fishbone when I was a teen, but I never loved them. Rather, I was taken with how cool they were. Anyone who wore the skeletal fish insignia had instant cool cache. Frankly, I found their music somewhat inaccessible, but I still admired them, especially their wild intensity. And so, watching Everyday Sunshine, I had a big grin on my face, soaking in their history and personalities. And then, slowly, the grin was washed away, as the reality of the band’s slow unraveling, and the aging of its musicians, soaked in. It’s ultimately a bittersweet story, but it’s a well made one, weaving in the history of black L.A., incorporating a host of impressive interviews (Gwen Stefani, Branford Marsalis, Flea, Ice-T and George Clinton, among them), and most impressively, giving a taste of the band’s live intensity as well as showing who the real men are behind Fishbone.

Everyday Sunshine may well be the band’s epitaph, so that’s why I’d suggest anyone in Texas to get to the fest, and check out this (last?) little bit of lightening in a bottle. But before you go, here’s a quick discussion with the directors of Everyday Sunshine, Lev Anderson and Chris Metzler.

Doc Soup Man: How long have you been working on this doc?

Lev Anderson and Chris Metzler (co-directors): We’ve been working on Everyday Sunshine: The Story of Fishbone on and off for the past 4 years. We started things off by going on the road with the band during a month long tour in Europe and took it from there.

DSM: Is SXSW the first fest for the film? Why’s SXSW a good place to show it?

Anderson & Metzler: This isn’t the first film festival for the documentary, as we had our world premiere last June at the Los Angeles Film Festival. After packing the house there for four sold out screenings and rave reviews we’ve been screening at film festivals across the States. It’s been a strange and fun whirlwind, with screenings running the gamut from a Sunday night show (screening and concert with the band) in a heavily Mormon town in Utah to a festival in Little Richard’s hometown of Macon, Georgia to a crowd of punk rock hipsters in San Francisco. People seem to dig it, even if they weren’t with familiar with Fishbone before they stepped into the theater. We couldn’t have hoped for better.

So our screening at SXSW is coming at the end of our festival run as we prepare for a theatrical release later this summer. What better place to cap the festival run than SXSW? SXSW is rock ‘n’ roll from floor to ceiling and the story of Fishbone is straight up rock ‘n’ roll, so that is reason enough. Many of today’s indie rock fans may not be familiar with a band like Fishbone but would likely dig the band’s independent streak. We are excited about exposing them to the band’s story, success, and struggles as Fishbone made it easier for today’s up and coming bands to find their own voice beyond the strictures of genre.   Plus with SXSW being not only a large music festival, but a prestigious film festival as well, it is a great event that synthesizes the two art forms and a way to share the film with several different types of audiences all at the same time.

DSM: What do you expect Thursday’s screening and concert to be like?

Anderson & Metzler: Our screening at SXSW will be fun as the band will be there for the post-screening Q&A, so that means not only just Angelo and Norwood, but also Dirty Walt who has recently rejoined the band. Another former original member Fishbone, Chris Dowd, will also likely join the band for the Q&A and concert. So, yes, you get both Fishbone on screen and in person, as later that night the band will hit the stage with the Wu-Tang Clan to play the Village Voice showcase. Expect some good old fashioned ska-punk-funk-metal on display with stage diving, mosh pits and a lot of ass shaking. We like to think of this sort of event as a true 3-D/4-D experience.

DSM: With the success of the doc Anvil!, that band has had a revival of sorts. What do you expect your film will do for Fishbone? What’s your hope? Another way of asking this is: Do you think your film, and the consequent attention given to Fishbone, will provide the band a last hurrah? Is this its last hope for another act?

Anderson & Metzler: It’s funny because some times we run into people that compare the two films and refer to this film as the “Black Anvil.” We definitely love the doc Anvil! but weren’t aware of it during a majority of our filming. When we saw it, it was interesting to see some of the same artistic struggles that it seems lots of trailblazing musicians go through and the dark comedy that comes from that experience.

We’d be excited to have Fishbone as a band see some of the commercial benefits and revival that Anvil has seen as a result of that film’s success and hopefully ours. Fishbone still creates fun, genre-defying music with artistic integrity and put on unpredictable and inspiring live shows. Perhaps that’s the one difference between the bands as Fishbone has gone non-stop for 25 years and have toured constantly. There has been no break-up nor glorious reunion, just a hardcore devotion to their music. So while the film has already started to draw in a lot of lapsed fans and newbies discovering the band, whatever happens with the film, Fishbone will probably just keep being themselves no matter how the film may or may not be a part of their future success.

In the end, the story of Fishbone can be an inspirational tale for anyone that may feel like outsiders or may deviate from social expectations. Fishbone has shown it is okay to do so and that you can find success if you work hard and keep an open mind. While Fishbone never made millions, they created a musical legacy that has already inspired a lot of people. And there is no reason it can not inspire more. We hope the film does that.

Independent journalist Tom Roston checks in and writes about the world of documentaries in his column, Doc Soup. You can also follow